The 53rd Maryland Infantry Regiment Militia which became known as “The Maryland Guard” was the pre-war unit that was one of the best trained and drilled organizations in the country at that time. Many of the members of the 1st Maryland Infantry Regiment previously served in the 53rd. Its motto “Decus et Prsesidium”, Latin for “A Honor and A Guard”. The unit disbanded shortly after the Baltimore Riots after 1861 and Lincolns Martial Law upon the state.  Most of the men of the 53rd were “pro South” which found many heading south to enlist in the Confederate Army.  Some of those men formed the core of the 1st Maryland Infantry Regiment. Capt. Herbert, Captain. Murray, Lt. McKim, Lt. Booth, Lt. Howard to name a few, all were former members of the 53rd Maryland. 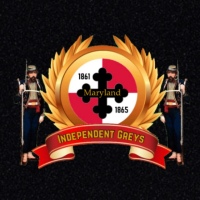